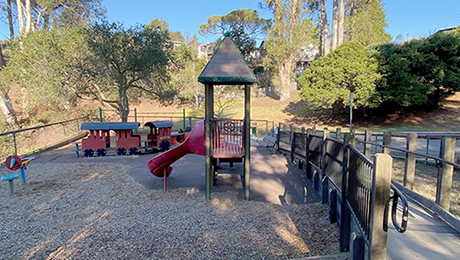 Glendale-La Loma Park, located on a terraced hillside with great views, offers a variety of opportunities for play and recreation.

The City of Berkeley purchased the first parcel of land, the site of a former quarry, in 1949. Part of the site was filled in and leveled in 1962, and two additional properties were purchased from private owners in 1966-1967. A baseball field was added in 1967, and the upper terraces were developed in 1969-1970. Glendale-La Loma Park was dedicated at a public ceremony held on November 1, 1969. In 1974, the park was awarded the National Merit Design Award by the Professional Awards Program of the American Society of Landscape Architects.