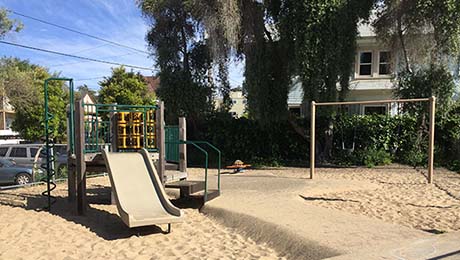 Ohlone Park was developed on BART- owned property along the strip of land known as Hearst Corridor after the City decided to underground the BART tracks within Berkeley. A citizen's committee formed in 1974 to study possible uses of the BART property along Hearst Avenue overwhelmingly preferred park development.

At first known as the Hearst Strip Park, residents debated other names, including “Everybody’s Park”, until consensus formed around Ohlone Park. A portion of the park, west of McGee Avenue was known as People’s Park Annex following the demolition of People’s Park on University of California land.

Preliminary plans for the park were completed and approved in November 1978, and the park was formally dedicated on June 7, 1979. Measure Y funds, from the 1974 bond to meet the recreational needs of Berkeley citizens, were used to construct the park. The off-leash dog park (at Hearst and Grant) was established in 1979. It is one of the first dog parks in the country, and was renovated in the mid 1990's, and renovated and expanded in 2016.

In the late 1990s, Native American artist Jean Lamarr designed and painted a mural on the large concrete vent at Milvia, depicting the history of the Ohlone people after whom the park is named.