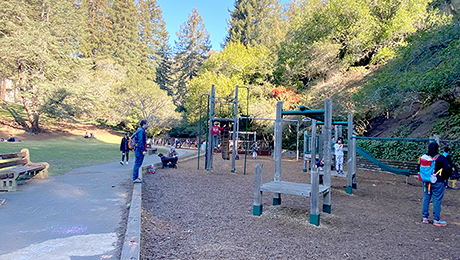 Codornices Park offers a wide array of recreational and play opportunities in a beautiful hillside setting.

One of the first parks in Berkeley, Codornices Park was opened in 1915 with a splendid field house, a fine tennis court, and many other play features. By an agreement dated October 11, 1921, the City of Berkeley leased the land, which was owned by the Water Company (succeeded by the East Bay Municipal Utilities District, or EBMUD) for $1.00 a year for 50 years. The City exercised the option to buy the land in 1967 and acquired the property from EBMUD for $68,968 on January 22, 1976. The softball field was added in 1970. A community group, Los Amigos de Codornices, came together in 1980 to develop a park plan and begin a series of community work parties to restore paths, meadows, hillsides, bridges, and trails.