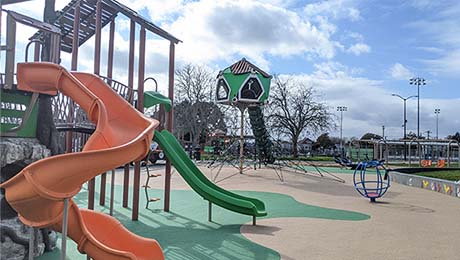 San Pablo Park offers a wide range of recreational activities for all ages, from baseball and basketball to younger children’s play areas.

The land for San Pablo Park was purchased in 1907 for $35,000, making this the City of Berkeley’s oldest park. U.C. Professor Gregg laid out plans for the park in 1914, and a ball diamond and field house were constructed that year. The recreation field was opened for public use in September 1914, one month after the first general superintendent of City playgrounds was appointed. By 1918, the park had two ball diamonds, two tennis courts, hardball courts, and a field house; it was recognized as “one of the best recreation fields” in the Bay Area. A clubhouse was dedicated in 1930.

Groundbreaking ceremonies for a new recreation center were held on January 7, 1964. The building was dedicated on October 18, 1964, 50 years after the park’s opening. The center reflected community desires and was designed by architects Campbell and Wong, and cost $200,000. A unique feature was the 5100-square-foot enclosed, landscaped patio and covered walk forming the inner courtyard of the building.

An open house was held on April 27, 1968, to dedicate the new basketball courts, a putting green, improvements in the tennis courts and play areas, and the planting of 150 full-grown trees. Further improvements to the park and renovation of the recreation center were made in 1983–1984 with monies from an Urban Park and Recreation Recovery (UPARR) grant.

In January 1984, the Parks and Recreation Commission approved a resolution to name the center the Frances Albrier Recreation Center, and on September 23, 1985 adopted a resolution dedicated the park to honor Bill Haywood; both Albrier and Haywood were long-time Berkeley activists.

The Friends of San Pablo Park have been active in recent years, and helped redesign and renovate the tot lot.