The purpose of the Sacramento Complete Streets Improvements Project is to improve pedestrian and bicyclist safety at the following intersections of Sacramento Street:  Virginia Street, Delaware Street, University Avenue, and Addison Street.  Construction of the Project began in July 2020 and is anticipated to be completed in December 2021.

In general, the work of this Project includes construction of new sidewalk extensions with directional curb ramps that meet the standards of the Americans with Disabilities Act (ADA); new pavement markings, including crosswalk, vehicular lane, and bike lane markings; a new traffic signal at the Virginia Street intersection; and dedicated left turn traffic signal phases at the University Avenue intersection to eliminate conflicts between pedestrians and left turning vehicles.

There will also be safety-related improvements for bicyclists that prefer to ride on a separated pathway, away from motor vehicles.  City staff have been working closely with Bay Area Rapid Transit (BART) on the latter’s proposed bicycle and motor vehicle ingress and egress modifications at the North Berkeley BART station.  BART’s project will provide a needed link between two segments of the Ohlone Greenway pathway that are separated by this BART station, via dedicated bike lanes that will route bicyclists through the BART station grounds.  BART’s construction project is expected to begin several months after the start of construction on the Sacramento Complete Streets Improvements Project. 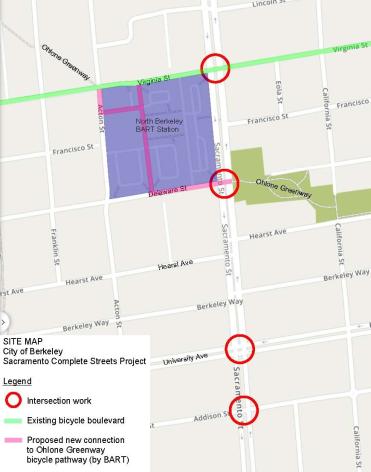 The project will improve the intersections where Sacramento crosses Virginia, Delaware, University, and Addison

The project will improve the intersections where Sacramento crosses Virginia, Delaware, University, and Addison

Be a global leader in addressing climate change, advancing environmental justice, and protecting the environment