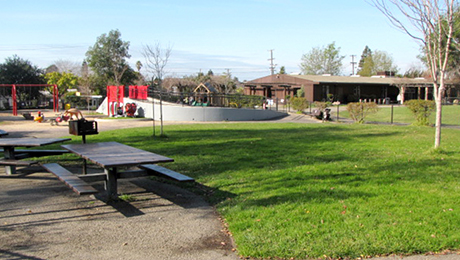 Cedar Rose Park offers many recreational opportunities, such as soccer, basketball, and tennis, along with play areas for both tots and school-age children and nearby community gardens.

Cedar Rose Park was developed along a portion of the abandoned Santa Fe Railroad right-of-way and additional parcels purchased by the City of Berkeley. It was funded by a combination of Park Bond Act and Measure Y monies after voters passed a bond measure in 1974 to fund additional park development.

A Master Plan was adopted in 1979, under Measure Y, and Phase I was developed, including an open playing field, playgrounds, and a Recreation Center. On July 26, 1980, the park was dedicated and opened to the public. SB 174 funds were allocated in 1982 for Phase II, which provided tennis courts, volleyball and basketball courts, pathways, lighting, a community garden, and rest rooms. Phase II was completed in 1984.