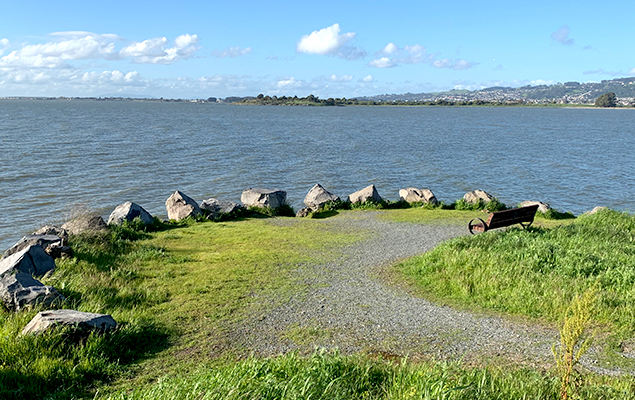 César Chávez Park, built on the site of a former landfill, offers a wide range of recreational opportunities in a marina setting with spectacular views of the three bay bridges, Alcatraz, and Angel Island.

César Chávez Park features hiking trails, including the 1.25 mile Dorothy Stegmann trail around the park’s perimeter that is fully wheelchair accessible. There’s even a wildlife sanctuary at the undeveloped northern end of park.

The park was renamed in 1996 after César E. Chávez, noted union leader and founder of the United Farm Workers of America. In 2004 the Berkeley City Council approved the Phase I Design for the Chávez Memorial Solar Calendar. For city-wide commemorative activities and resources at César Chávez, visit http://www.ecologycenter.org/chavez.

A 17-acre off-leash dog area was recommended by a special Task Force created by City Council and was approved with modifications by the City Council in 1998 after a long period of public hearings and review by various commissions. Originally known as North Waterfront Park, this open space was built on a former landfill that dated back to 1957, when dikes were constructed for the purpose of containing municipal waste. In 1969, a Marina Master Plan was adopted setting aside the landfill area for unstructured recreation. The landfill was completely sealed in 1991 and the park opened soon thereafter.