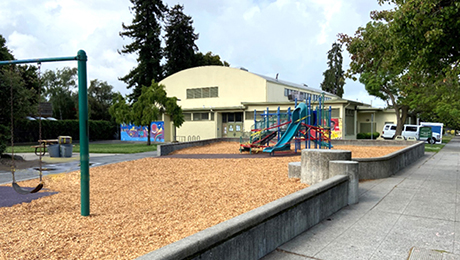 In August 1927, the City of Berkeley acquired options to purchase five parcels of land for $32,000. These were added to property already owned by the City in the block bounded by Grant, Grove, Russell, and Oregon Streets. In January 1949, the City signed a lease with the Berkeley Unified School District (BUSD) granting to the City the right to build a recreation center at the site. Built at a cost of $75,000, the Grove Recreation Center was dedicated on September 11, 1950.

In 1963–1964, the City acquired additional property at the corner of Russell and Grant to expand the park facilities. The City purchased another parcel from the BUSD in 1980, using Land and Water Conservation Funds (LWCF) and Measure Y funds from the bond measure passed in 1974 to fund additional park development. In 1981 the ball diamond was renovated, and the basketball and volleyball courts, two play areas, and picnic facilities were developed. In 1982, the recreation center was renovated with state park bond monies and an Urban Park and Recreation Recovery (UPARR) grant.