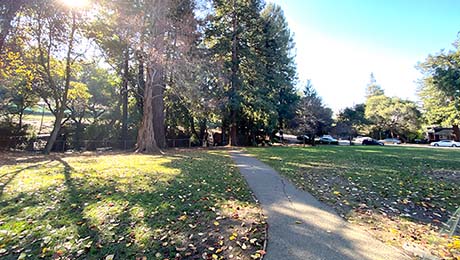 Live Oak Park, the site of several community festivals, offers a range of recreational opportunities, with basketball and tennis courts, a community center, and tot and school-age play areas.

The City Council authorized the purchase of the park site in 1914 for the price of $87,000, bought on installments. The park opened to the public on June 1, 1916. The City purchased additional parcels for expansion in 1923 and 1926.

A building on the original parcel was used as a branch library; an aviary was constructed in 1918, as were tennis courts, open-air fireplaces, picnic tables, and a playground. The Live Oak Athletic Club played football, basketball, and baseball there from 1921 to 1928, and included many future champion U.C. and State players. Tennis great Helen Wills Moody, who lived near the park, practiced on its tennis courts.

The recreation center building was dedicated at ceremonies held on March 4, 1956, and the Art and Garden Center, located on 1.15 acres of land across from the park, was donated by the Berkeley Rotary Club and dedicated on May 7, 1967.

Volunteers organized by Friends of Live Oak Park have been instrumental in recent improvements, including the renovation of the beautiful stone fireplace.